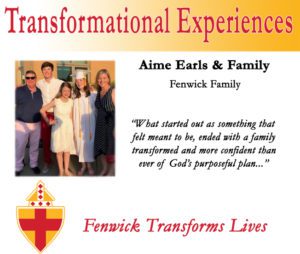 Growing up in Middletown, Chris and I, both Middletown graduates, had always viewed Fenwick as the “other” high school in our area.  Our perspective was limited but we knew it had to be special because so many cherished friends were Falcons. Although we had always heard so many wonderful things about Fenwick, sending our children to school there, was not a consideration.  We were intimidated by the cost and not Catholic, so initially it did not seem like a place where we would “belong”.

In 2014 Chris was asked to coach baseball for the Fenwick Falcons. Although we had no children at Fenwick, and no plans to send any there in the future, Chris proudly and without hesitation, accepted the position. I still remember the day he brought home his first Fenwick baseball hat… He was so proud!  He was a part of something special, doing what he loved most.

Inevitably, our son Carter became the bat boy for Fenwick baseball as well as the water boy for Friday night Falcon football.  Our daughters Ellie and Evie and I would watch as they left each day to go cheer on “their” Falcons.  Carter instantly felt like a Falcon and becoming a “real Falcon” someday was something he talked about often.

Chris fell in love with Fenwick as well.  The pride, the honor, the traditions and the community at Fenwick was something he often would try to put into words.  He would say…”it’s just different”… “it’s what you want your kids to be a part of”.   And so it began…our goal to send Carter to Fenwick.

Becoming a part of the Fenwick Community has been one of the greatest blessings of our lives.  At the time, we had no idea that our Fenwick plan would also include Ellie (who would transfer to Fenwick in the middle of her junior year) and a plan for Evie to attend as well.  We thought we were just trying to help Carter achieve a goal…little did we know; Fenwick would become a gift to all of us in so many ways.

Ellie graduated from Fenwick this year.  She entered Fenwick a little late in the game but took the advice of her favorite teacher, Coach Aregood. Mr. Aregood told her to “be a part of everything she possibly could and to embrace everything Fenwick had to offer.”  Through these words of encouragement…the greatest transformation I think I will ever witness happened.

Ellie joined every club and organization she could and became a fixture at Campus Ministry. On Tuesdays, she would “Jam with Jesus” and eat lunch with new found friends.  Whether it was packing lunches for those less fortunate or serving as a school Ambassador, she absolutely flourished in her new “home”. Her courage to take a leap of faith and transfer to a new school was proving to be an absolute life changing decision.   A child with little coordination tried out for the cheerleading squad and cheered proudly through her senior year.  Even though she was only an official member for 2 months, she became part of the National Honor Society. Later this month, she will join other Fenwick students on a powerful mission trip to Tennessee.

Bishop Fenwick students, teachers and staff wrapped her up, gave her love and taught her how to shine.  She was a part of something that she not only embraced, but embraced her as well.  Seeing this in my daughter, literally transformed me as a parent. It taught me about hope and perseverance and it taught me that God will listen to heartfelt prayers.

Through Fenwick, our entire family was given the chance to grow closer to God and at this past Easter vigil, we proudly converted to Catholicism.

What started out as something that felt meant to be, ended with a family transformed and more confident than ever of God’s purposeful plan…all because of a school where we thought we may not belong.